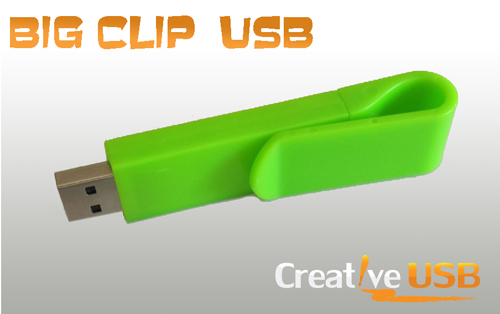 Lending itself to big dramatic logo presentations. Store both your digital files and your paper based information securely with our new USB drive. The Big Clip USB comes in all the standard USB capacities and can be customized on both sides. The drive comes in a multitude of colors and features a plastic body making it both durable and light. 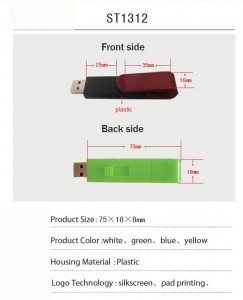 This drive can be customized with silkscreen or pad printing and is quite a bit larger than the standard swivel style drive lending itself to big dramatic logo presentations.

For more information about how this drive can be customized with your logo or to get prices please contact me at 612-782-8200. 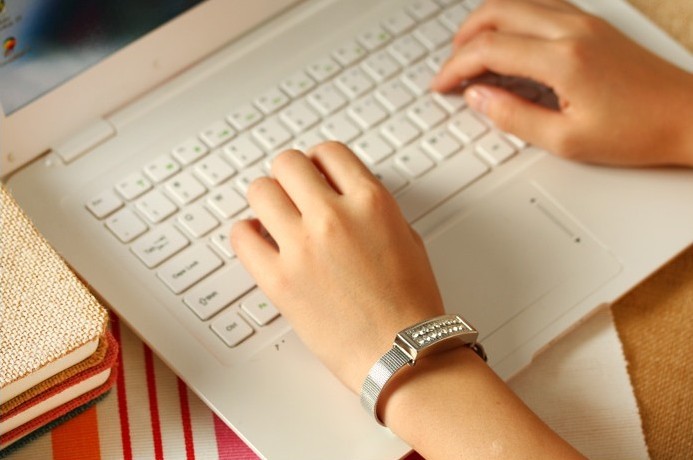 Looking to add a little flash to your data storage?

The Creative USB Blingy Bracelet it the perfect way to take your data with you in style.

Stop worrying about where you left your flash drive.  Put it on and forget about it.

You can rest easy and relax when all your important data is securely on your wrist. 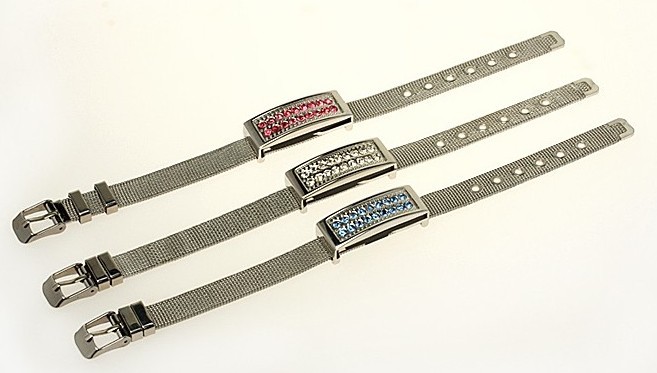 Have you data close at hand with Creative USB’s newest product The Blingy Bracelet USB.

Perfect for your next Swag Bag? 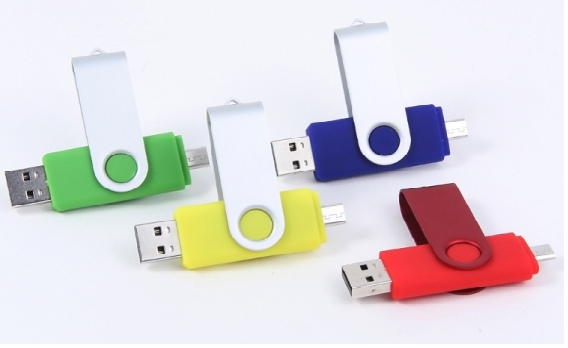 Tablets and mobile phones are now the dominant force in personal computing.

These connected devices make accessing your data anywhere you want a breeze. They are especially adept at chewing through small manageable data. One shortcoming albeit very miniscule is the ability to transfer large data effectively.

Rather than chew through my limited AT&T data budget and risk dropped connections when transferring videos to my Nexus 7, I’ve found OTG cables to be a godsend.

But OTG cables require a laptop or desktop for tethering and limit your mobility. 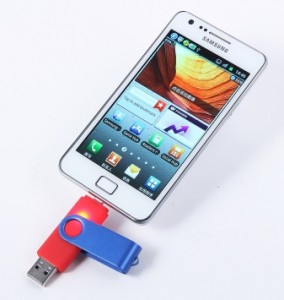 Regain your mobility with Smartphone U-Disk
Connect directly to your mobile phone or tablet with a USB flash drive with a Micro USB port.

To learn more about the U-Disk and how you can use them to market and distribute your content, please contact us today.

Hey there Siri, it’s me Voicelok. You don’t know me but I’m thinking we could be soul mates. You see, I’m a voice-authenticating USB flash drive and you, well, everybody knows who you are. At least they ought to by now. Unlike other USB flash drives or thumb drives, I have built-in voice recognition software. I am actually known as the only USB storage device whose contents are under voice activated password protection. I can be helpful without requiring the standard types of software installation. Owners need to simply find the nearest USB port and speak their password to authenticate. What’s that you say, laryngitis? Ah, what if the user has laryngitis? Well, as I was saying, I’m no ordinary USB drive, there’s an override for that. And by the way, I am PC and MAC compatible. I know, I know. For now, being a humble USB device I am not as fabulous as you, but I’m getting there. And well, you and me together – could be a match made in – science? 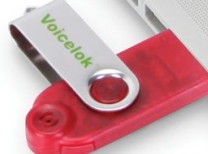 Some time ago Victorinox, the Swiss Army Knife people, in recognition that the USB flash drive is practically a survival tool, added a USB flash drive to their famous, portable multi-tool set. But that was then. Now it’s a new day for Victorinox as they launch an even better USB drive. Well actually, they launched drives at CES 2011. One of these is the Victorinox SSD which offers a terabyte of storage capacity, enough to hold 220 million pages of text or almost two years worth of uninterrupted music. The other product is the Victorinox Slim, a USB drive with faster read/write speeds and enough bells and whistles to keep data secure and portable. And in recognition of today’s world, the Victorinox SSD has separate housing for flight-friendly or regular use of its implement. The flight-friendly version is a knife-free body, all the better to get through airport security. We can’t wait to see what they’re planning next.

Generally when we refer to USB technology here, we’re talking about the USB flash drive, its endless array of shapes, sizes and capacities, as well as its uses. We also often discuss portable applications that allow better portability, functionality and security with USB drives. But today’s news is all about the USB port which by now you should know is different from the USB drive – it is where you would insert the USB flash drive. Last year we spent some time discussing USB 3.0, the new standard of USB technology that runs faster and on occasion may cook you breakfast – though we aren’t ready to be quoted on that. Meanwhile USB 2.0 still seemed to rule widely. Now it turns out that numerous new devices from such respected names as AMD and Intel will be supporting USB 3.0 ports. This trend will surely migrate to all other devices, big and small, mobile and static – are there static devices? And for the late adopters among us, we’re thinking backwards compatible. 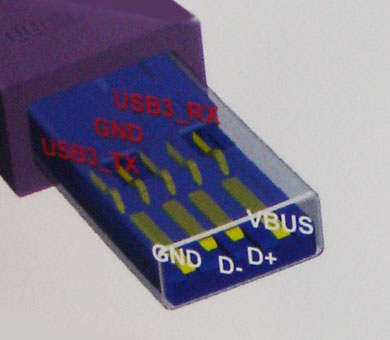 A Swiss Army Knife with a USB flash drive is nothing new, but at CES 2011 the folks at Victorinox Swiss Army unveiled even more USB flash drives in their tool sets. By now the USB drive has quite possibly surpassed most of those other tools in terms of common usage anyway. The Slim, Slim Duo and SSD are the latest iterations of the USB drive with knife tool. The Slim USB drive has 64GB of storage while the DUO has two USB drives and the SSD has around 256GB and is said to be the world’s smallest SSD drive. And it has numerous other attractive features such as secure data encryption – apologies to all those who prefer their data encryption to be not very secure. 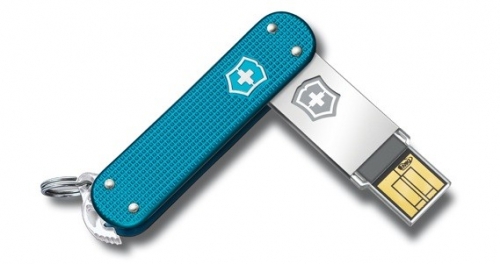 This drive also features a nail file and a knife. We imagine the possibility of a nail file that is also a USB drive or vice versa. Get the latest Swiss Army flash drives with knife, or without for ultimate flight carry-on friendliness. Additionally, these USB drives are sporting the latest stylish shells. Enough to be the latest fashion accessory for the well dressed business executive on the go.

It’s not always the biggest decision on any given day but it’s something worth considering. When you add your promotional message to be launched from a USB flash drive, should you allow your message to be erasable or not? If the client can erase your message, chances the USB drive will be around longer but then your promotional message may not be around for future viewing. On the other hand, if the message is engaging, fun and short, clients are likely to view or share the USB drive with others. In some cases, a short promotional message is included on a USB drive with extra storage space for clients to add their own content. Then the message is seen whenever the flash drive is launched but the client gets to use the storage space. 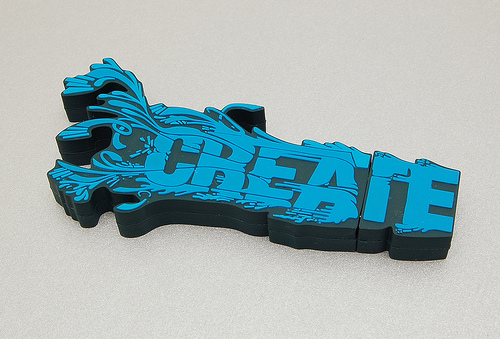 One obvious way to overcome this is with a unique USB flash drive designed just for your purposes. It could be a whimsical shape, or it could feature your branded colors, logo or font, or any combination of these characteristics that are immediately recognizable. Depending on the design there could be room for your tagline as well. In such a case, it wouldn’t matter if your content on your promotional USB flash drive is erasable or not, the customers will “see you” whenever the drive is used, and even if it’s not launched, as long as it’s visible. With so many different ways to use promotional USB drives, there isn’t one answer that fits every purpose. Erasable or not isn’t so much a choice as a strategy. 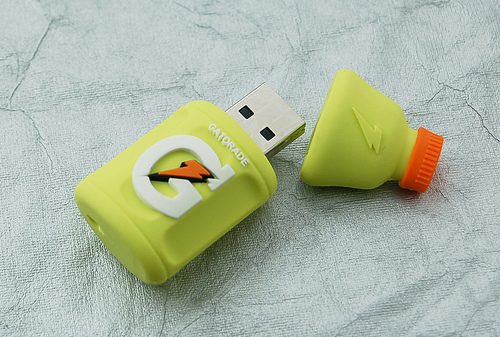